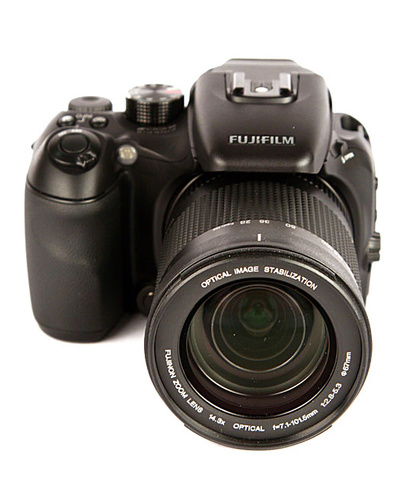 Overall conclusion:
With the price of DSLRs dropping all the time, the justification for bridge cameras between compacts and full-grown DSLRs looks increasingly weak. The S100FS makes a game job of proving that there is still room for such a camera.

It represents an awful lot of camera for comparatively little money and one that is more flexible than a DSLR kit for the same outlay. Its feature set, including very respectable RAW performance and dynamic range optimization is impressive. It&aposs nice to see a flash hot shoe, even if it isn&apost as sophisticated as the ones found on most DSLRs.

The extremely useful zoom range, which goes from genuinely wide-angle to super-telephoto, essentially means that if you think you can see a photograph, you can shoot it. Wandering around with DSLR users is a telling experience - they may have to stop and change their expensive lenses, while the S100FS user can just get on with composing their shot. And in terms of sharpness, the lens is excellent through most of its range.

It&aposs good to see FujiFilm include some RAW processing software, a practice that still hasn&apost become as widespread as it should be. Unfortunately, even on the fast PCs and Mac we tested it on, FinePix Studio is so slow and clunky that we can&apost imagine anyone using it on a regular basis. It goes against the camera&aposs &aposthis is all the kit you need&apos ethos to have to spend extra money on third-party RAW software, especially as FujiFilm seems to have a much better idea of how to get the most out of their cameras&apos files.

Most importantly, the S100FS&aposs image quality is generally very good (particularly in resolution and noise terms). There is some noise reduction smearing of fine detail but this is rarely a big problem. Highlight clipping, which is the other traditional problem for compacts, can be reduced using the rather handy expanded dynamic range feature. The film simulation modes are fun, if only occasionally actually useful. Overall, though, the images are not far off being DSLR-standard.

There is a cloud on the horizon, though, and its a cloud with oddly-colored edges. Chromatic aberration (CA) is a major problem at the focal lengths that are likely to be most used. The effect is so pronounced at times that it is visible even in small prints. The frustrating thing is that CA can be removed automatically - we&aposve seen it done in other long-zoom cameras, so know it&aposs possible, economically. It can also be manually removed from RAW files but the supplied FinePix Studio software doesn&apost provide the tools to do, so again you&aposre pushed towards using third-party software that don&apost do the images justice.

The other downsides, such as the underwhelming flash, short battery life and glitchy electronic viewfinder (which is only really an issue when you try to follow fast action) are minor niggles and certainly not unique to this camera. Essentially, deciding whether this is the camera for you depends on whether you are willing to accept a compromise - the CA is some of the worst we&aposve seen in recent times (particularly for a camera costing this much), but the rest of its performance is excellent. In A4 or 10x8 prints, you tend to notice the high quality and sharp detail at almost every focal length, rather than the CA. And remember, this is a camera that costs considerably less than any DSLR with an equivalent &apossuper zoom&apos or twin zoom kit (end of line bargains aside), and is lighter, less bulky and more user-friendly to boot.

Unfortunately, we can&apost quite in all conscience highly recommend a camera with such a flaw in its image quality. Which is a real shame because, for a lot of users, it will be a great camera that offers a well-priced and remarkably flexible alternative to a DSLR. But for anyone wanting to make large prints on a regular basis, it could be a disappointment, so we&aposd have to suggest they take a look at DSLRs and pore over our lens reviews.